Reuse is a major theme in software engineering practices. By reusing tried-and-tested components, the robustness of a new software system can be enhanced while reducing the manpower and time requirement. Reusable components come in many forms; it can be reusing a piece of code, a subsystem, or a whole software.

Can explain the costs and benefits of reuse

While you may be tempted to use many libraries/frameworks/platforms that seem to crop up on a regular basis and promise to bring great benefits, note that there are costs associated with reuse. Here are some:

An Application Programming Interface (API) specifies the interface through which other programs can interact with a software component. It is a contract between the component and its clients.

A class has an API (e.g., API of the Java String class, API of the Python str class) which is a collection of public methods that you can invoke to make use of the class.

The GitHub API is a collection of web request formats that the GitHub server accepts and their corresponding responses. You can write a program that interacts with GitHub through that API.

When developing large systems, if you define the API of each component early, the development team can develop the components in parallel because the future behavior of the other components are now more predictable.

An API should be well-designed (i.e. should cater for the needs of its users) and well-documented.

When you write software consisting of multiple components, you need to define the API of each component.

One approach is to let the API emerge and evolve over time as you write code.

Another approach is to define the API up-front. Doing so allows us to develop the components in parallel.

You can use UML sequence diagrams to analyze the required interactions between components in order to discover the required API. Given below is an example. 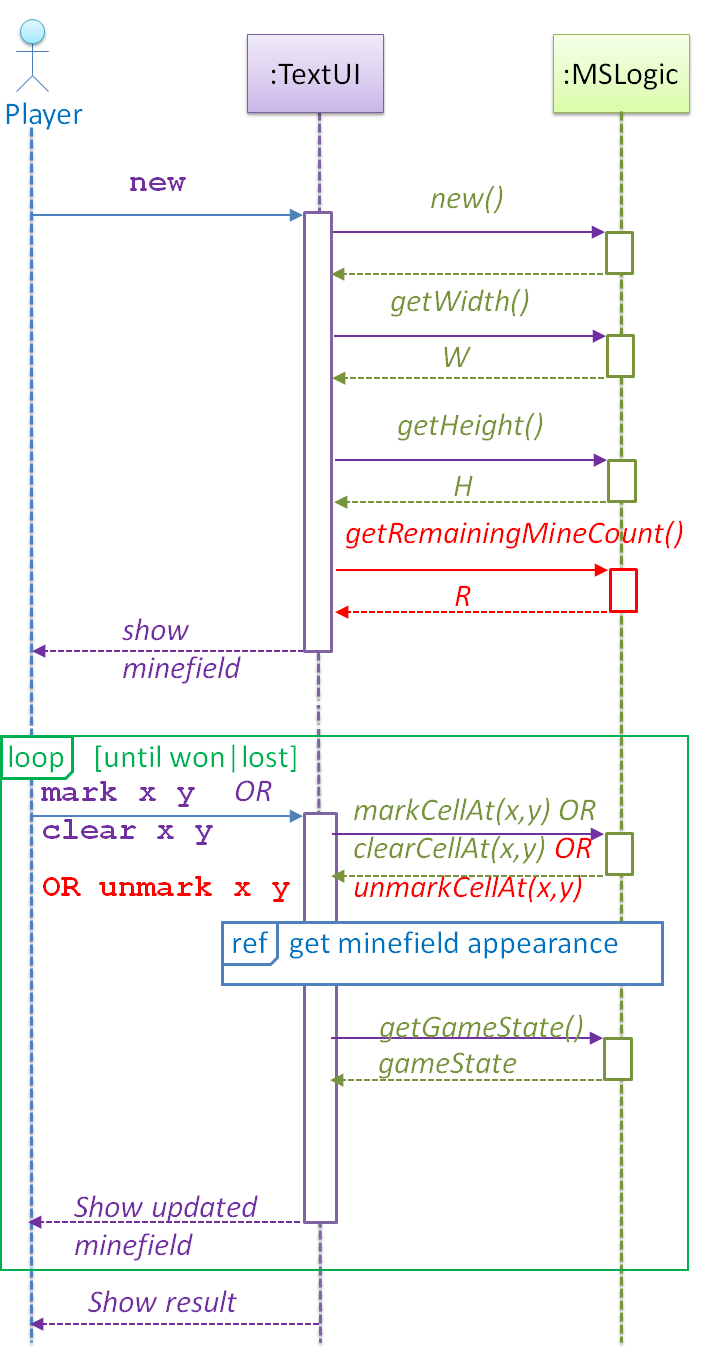 As you analyze the interactions between components using sequence diagrams, you discover the API of those components. For example, the diagram above tells us that the MSLogic component API should have the methods:

More details can be included to increase the precision of the method definitions before coding. Such precision is important to avoid misunderstandings between the developer of the class and developers of other classes that interact with the class.

A library is a collection of modular code that is general and can be used by other programs.

Java classes you get with the JDK (such as String, ArrayList, HashMap, etc.) are library classes that are provided in the default Java distribution.

Natty is a Java library that can be used for parsing strings that represent dates e.g. The 31st of April in the year 2008

Colorama is a Python library that can be used for colorizing text in a CLI.

Can make use of a library

These are the typical steps required to use a library:

The overall structure and execution flow of a specific category of software systems can be very similar. The similarity is an opportunity to reuse at a high scale.

A software framework is a reusable implementation of a software (or part thereof) providing generic functionality that can be selectively customized to produce a specific application.

Eclipse is an IDE framework that can be used to create IDEs for different programming languages.

Some frameworks provide a complete implementation of a default behavior which makes them immediately usable.

A framework facilitates the adaptation and customization of some desired functionality.

The Eclipse plugin system can be used to create an IDE for different programming languages while reusing most of the existing IDE features of Eclipse.

Some frameworks cover only a specific component or an aspect.

Can differentiate between frameworks and libraries

Although both frameworks and libraries are reuse mechanisms, there are notable differences:

Two well-known examples of platforms are JavaEE and .NET, both of which sit above the operating systems layer, and are used to develop enterprise applications. Infrastructure services such as connection pooling, load balancing, remote code execution, transaction management, authentication, security, messaging etc. are done similarly in most enterprise applications. Both JavaEE and .NET provide these services to applications in a customizable way without developers having to implement them from scratch every time.

Cloud computing is the delivery of computing as a service over the network, rather than a product running on a local machine. This means the actual hardware and software is located at a remote location, typically, at a large server farm, while users access them over the network. Maintenance of the hardware and software is managed by the cloud provider while users typically pay for only the amount of services they use. This model is similar to the consumption of electricity; the power company manages the power plant, while the consumers pay them only for the electricity used. The cloud computing model optimizes hardware and software utilization and reduces the cost to consumers. Furthermore, users can scale up/down their utilization at will without having to upgrade their hardware and software. The traditional non-cloud model of computing is similar to everyone buying their own generators to create electricity for their own use.

Can distinguish between IaaS, PaaS, and SaaS