A model is a representation of something else.

A class diagram is a model that represents a software design.

A model provides a simpler view of a complex entity because a model captures only a selected aspect. This omission of some aspects implies models are abstractions.

A class diagram captures the structure of the software design but not the behavior.

Multiple models of the same entity may be needed to capture it fully.

In addition to a class diagram (or even multiple class diagrams), a number of other diagrams may be needed to capture various interesting aspects of the software.

Can explain how models are used

In software development, models are useful in several ways:

a) To analyze a complex entity related to software development.

Some examples of using models for analysis:

b) To communicate information among stakeholders. Models can be used as a visual aid in discussions and documentation.

Some examples of using models to communicate:

c) As a blueprint for creating software. Models can be used as instructions for building software.

Some examples of using models as blueprints:

The following diagram uses the class diagram notation to show the different types of UML diagrams.

An OO solution is basically a network of objects interacting with each other. Therefore, it is useful to be able to model how the relevant objects are 'networked' together inside a software i.e. how the objects are connected together.

Given below is an illustration of some objects and how they are connected together. Note: the diagram uses an ad-hoc notation.

Note that these object structures within the same software can change over time.

Given below is how the object structure in the previous example could have looked like at a different time.

However, object structures do not change at random; they change based on a set of rules, as was decided by the designer of that software. Those rules that object structures need to follow can be illustrated as a class structure i.e. a structure that exists among the relevant classes.

Here is an object diagram for the above example:

And here is the class diagram for it:

Can use basic-level class diagrams

Contents of the panels given below belong to a different chapter; they have been embedded here for convenience and are collapsed by default to avoid content duplication in the printed version.

Associations are the main connections among the classes in a class diagram.

The most basic class diagram is a bunch of classes with some solid lines among them to represent associations, such as this one.

In addition, associations can show additional decorations such as association labels, association roles, multiplicity and navigability to add more information to a class diagram.

Here is the same class diagram shown earlier but with some additional information included:

Which association notations are shown?

UML notes can be used to add more info to any UML model.

Can use intermediate-level class diagrams

Explain notations in the class diagram

Can use advanced class diagrams

A class diagram can show association classes too.

Can use basic object diagrams

The analysis process for identifying objects and object classes is recognized as one of the most difficult areas of object-oriented development. --Ian Sommerville, in the book Software Engineering

The OO domain model of a snakes and ladders game is given below.

Description: The snakes and ladders game is played by two or more players using a board and a die. The board has 100 squares marked 1 to 100. Each player owns one piece. Players take turns to throw the die and advance their piece by the number of squares they earned from the die throw. The board has a number of snakes. If a player’s piece lands on a square with a snake head, the piece is automatically moved to the square containing the snake’s tail. Similarly, a piece can automatically move from a ladder foot to the ladder top. The player whose piece is the first to reach the 100th square wins. 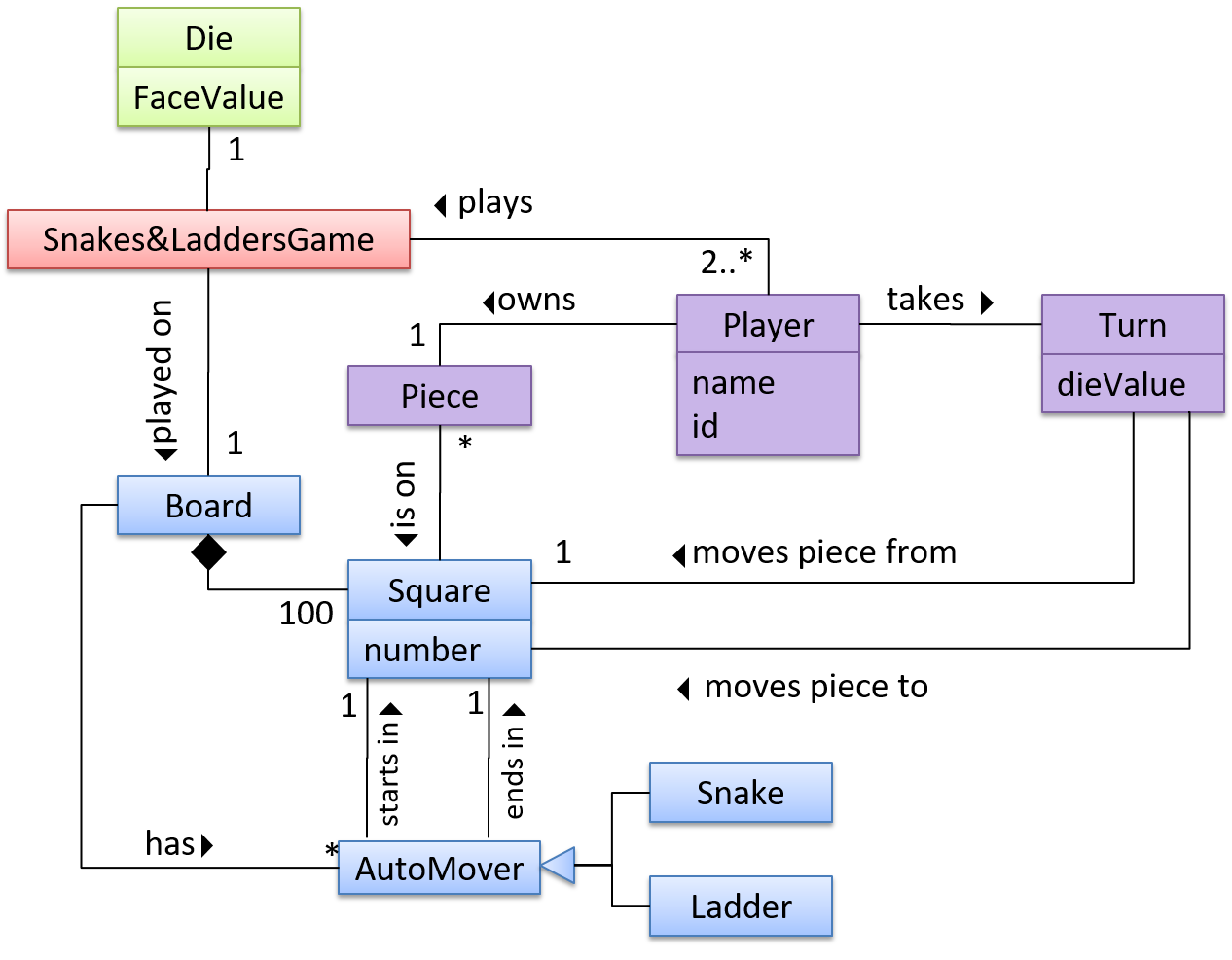 OODMs represents the class structure of the problem domain and not their behavior, just like class diagrams. To show behavior, use other diagrams such as sequence diagrams.

OODM notation is similar to class diagram notation but omit methods and navigability.

Difference between a class diagram and an OO domain model? 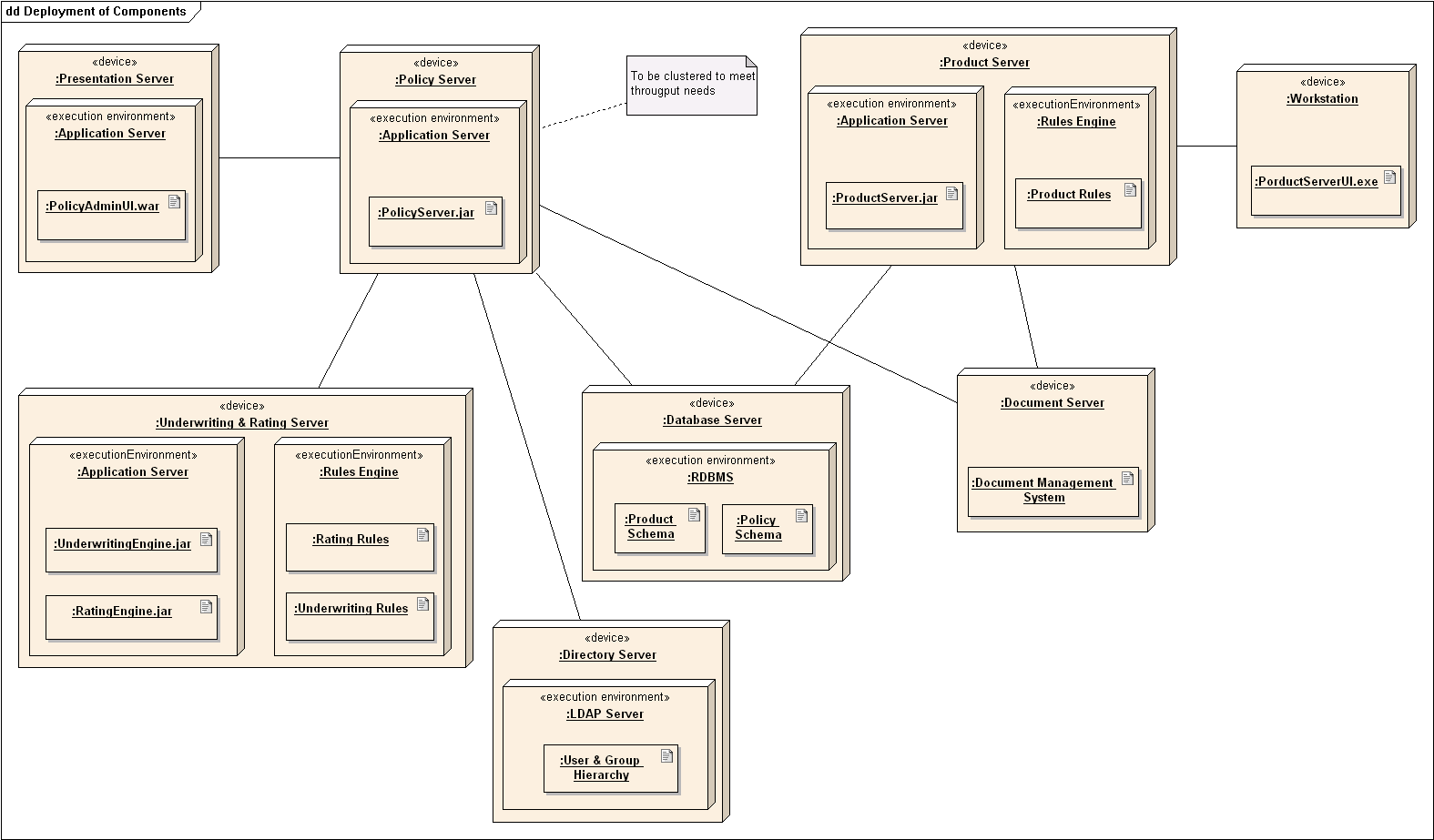 A component diagram is used to show how a system is divided into components and how they are connected to each other through interfaces. 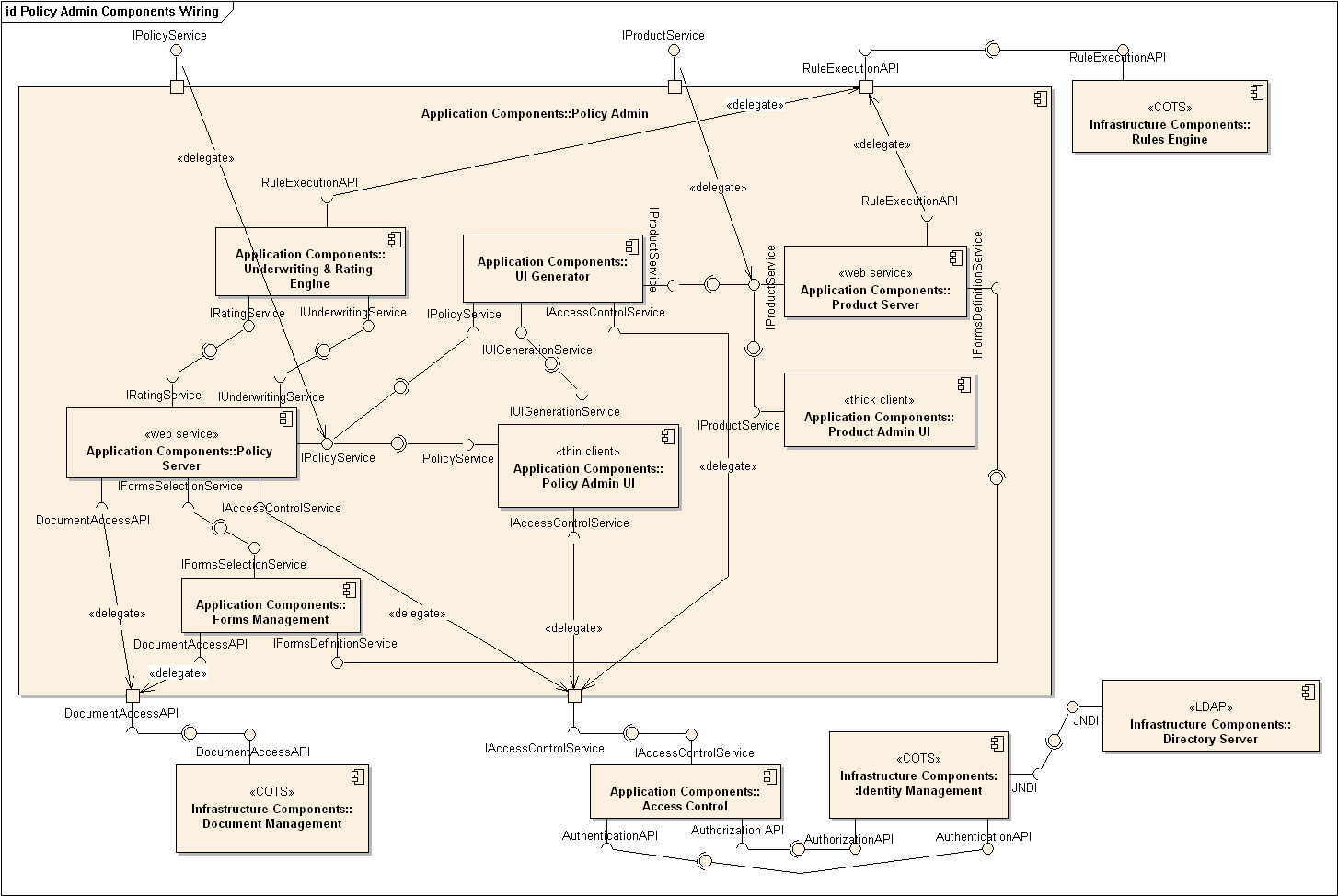 A package diagram shows packages and their dependencies. A package is a grouping construct for grouping UML elements (classes, use cases, etc.).

Here is an example package diagram: 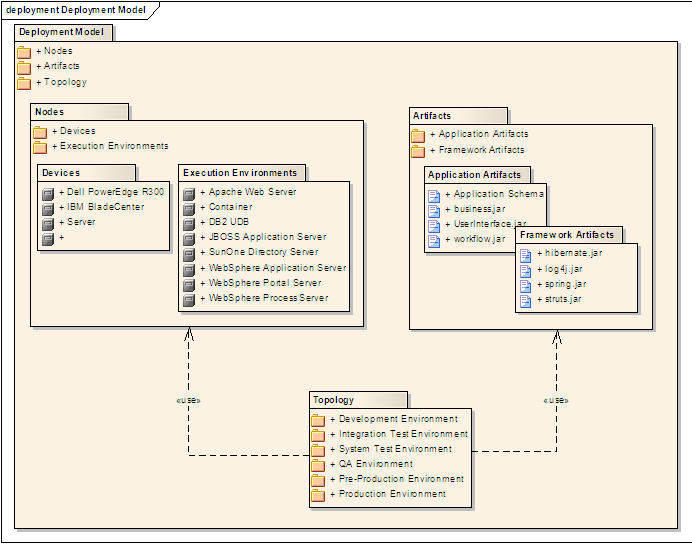 A composite structure diagram hierarchically decomposes a class into its internal structure.

Can use basic-level activity diagrams

Software projects often involve workflows. Workflows define the a connected sequence of stepsflow in which a process or a set of tasks is executed. Understanding such workflows is important for the success of the software project.

Some examples in which a certain workflow is relevant to software project:

A software that automates the work of an insurance company needs to take into account the workflow of processing an insurance claim.

The algorithm of a piece of code represents the workflow (i.e. the execution flow) of the code.

Which sequences are not allowed?

Model the algorithms of calculating grades

Model workflow of a Burger shop

Can use intermediate-level activity diagrams

Draw a Sequence Diagram for the code (PersonList, Person, Tag)

Can explain use case diagrams

Use case diagrams model the mapping between features of a system and its user roles.

A simple use case diagram: 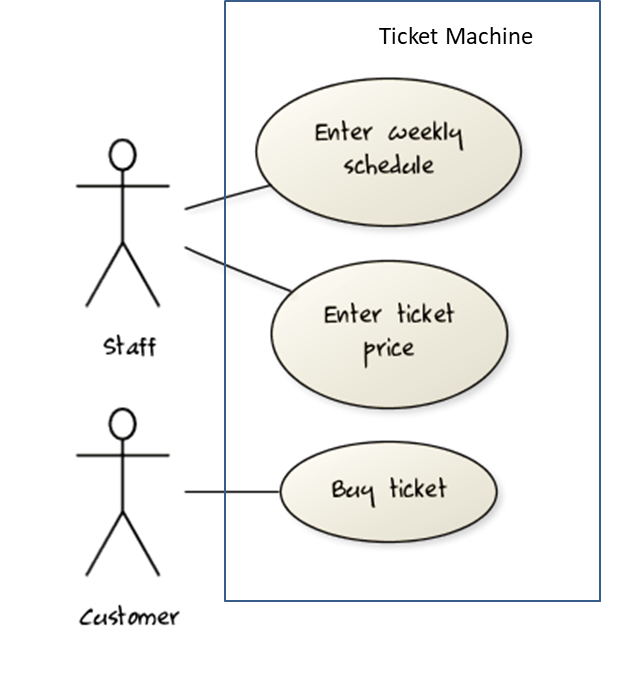 Here is an example timing diagram: 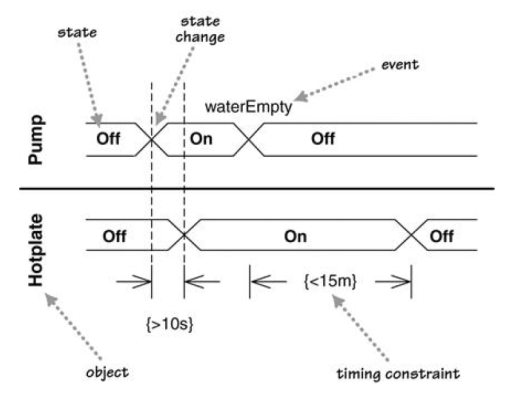 Interaction overview diagrams are a combination of activity diagrams and sequence diagrams. 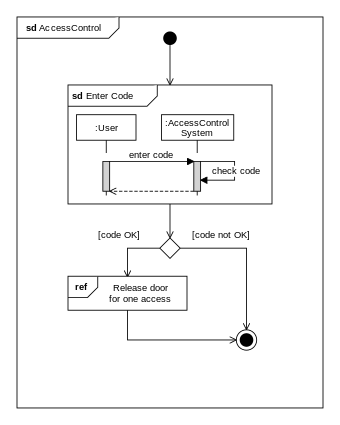 Communication diagrams are like sequence diagrams but emphasize the data links between the various participants in the interaction rather than the sequence of interactions. 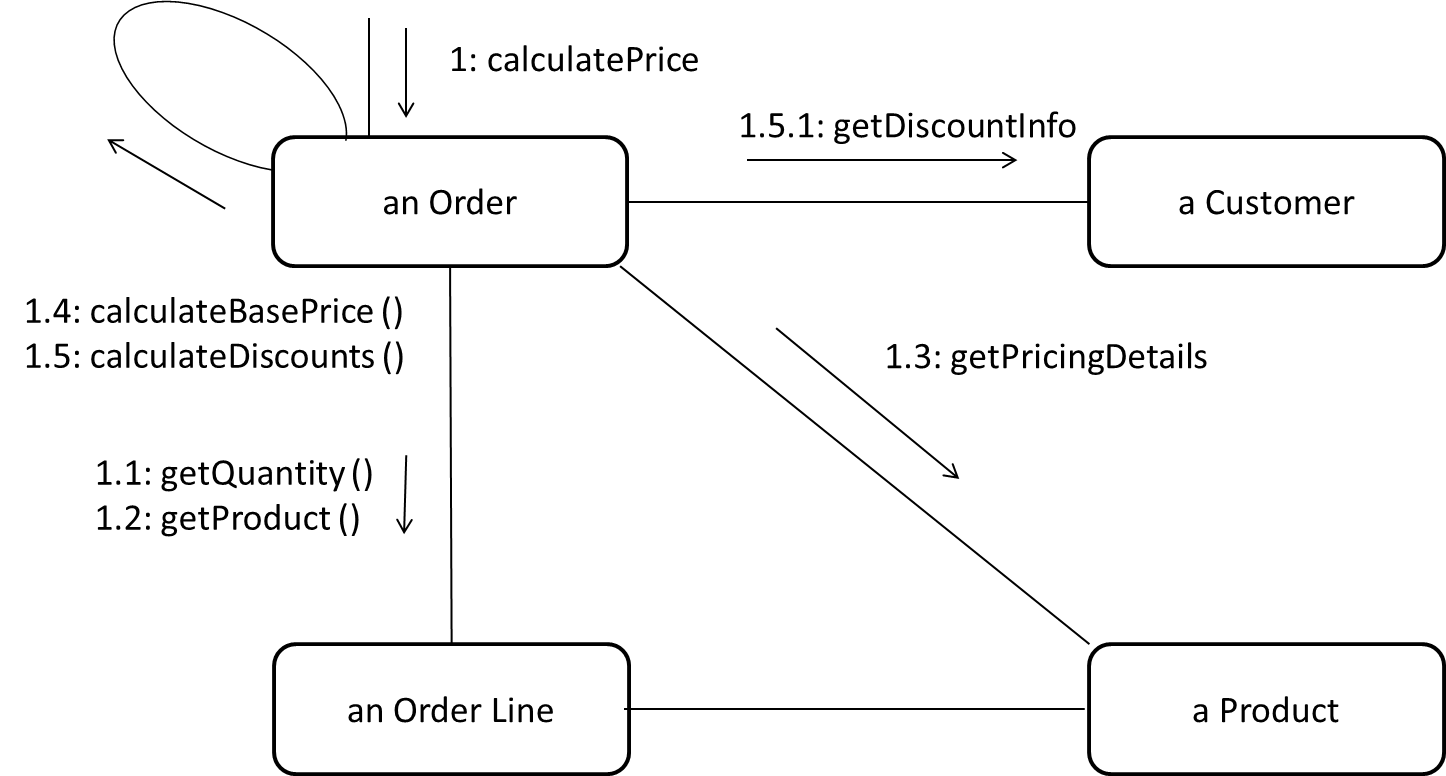 Consider how a CD player responds when the “eject CD” button is pushed:

Often, state-dependent behavior displayed by an object in a system is simple enough that it needs no extra attention; such a behavior can be as simple as a conditional behavior like if x > y, then x = x - y.

An SMD views the life-cycle of an object as consisting of a finite number of states where each state displays a unique behavior pattern. SMDs capture information such as the states an object can be in during its lifetime, how the object responds to various events while in each state, and how the object transits from one state to another. In contrast to sequence diagrams that capture object behavior one scenario at a time, SMDs capture the object’s behavior over its full life-cycle.

An SMD for the Minesweeper game.

Can explain how modeling can be used before implementation

You can use models to analyze and design software before you start coding.

Suppose you are planning to implement a simple minesweeper game that has a text based UI and a GUI. Given below is a possible OOP design for the game.

Before jumping into coding, you may want to find out things such as,

To answer these questions, you can analyze how the objects of these classes will interact with each other to produce the behavior you want.

As mentioned in [ Design → Modeling → Modeling a Solution → Introduction], this is the Minesweeper design you have come up with so far. Our objective is to analyze, evaluate, and refine that design.

Let us start by modeling a sample interaction between the person playing the game and the TextUi object. 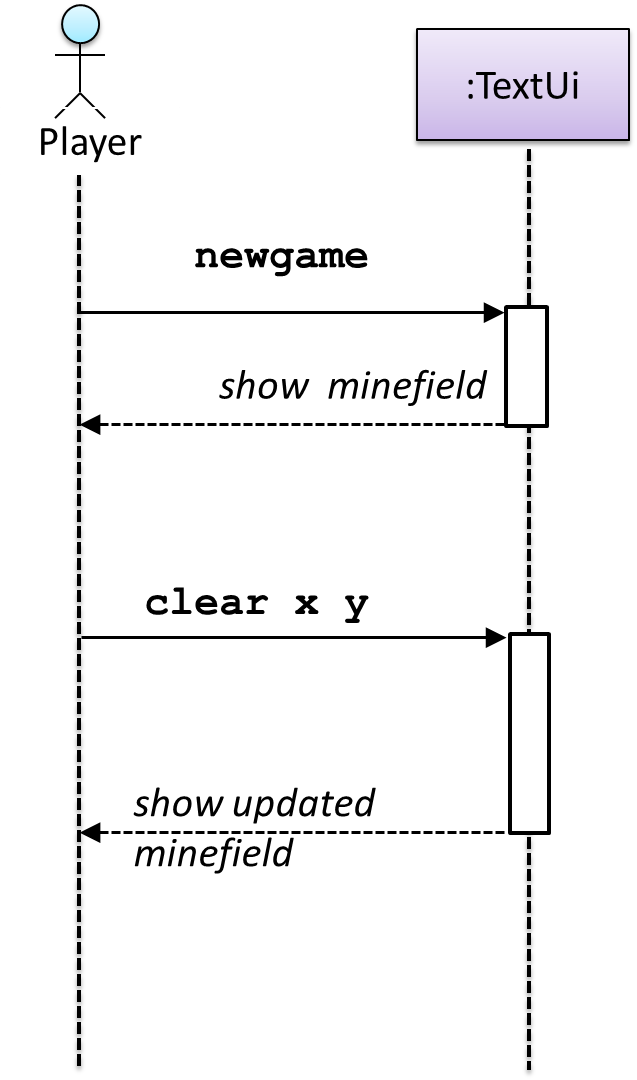 newgame and clear x y represent commands typed by the Player on the TextUi.

How does the TextUi object carry out the requests it has received from the player? It would need to interact with other objects of the system. Because the Logic class is the one that controls the game logic, the TextUi needs to collaborate with Logic to fulfill the newgame request. Let us extend the model to capture that interaction. 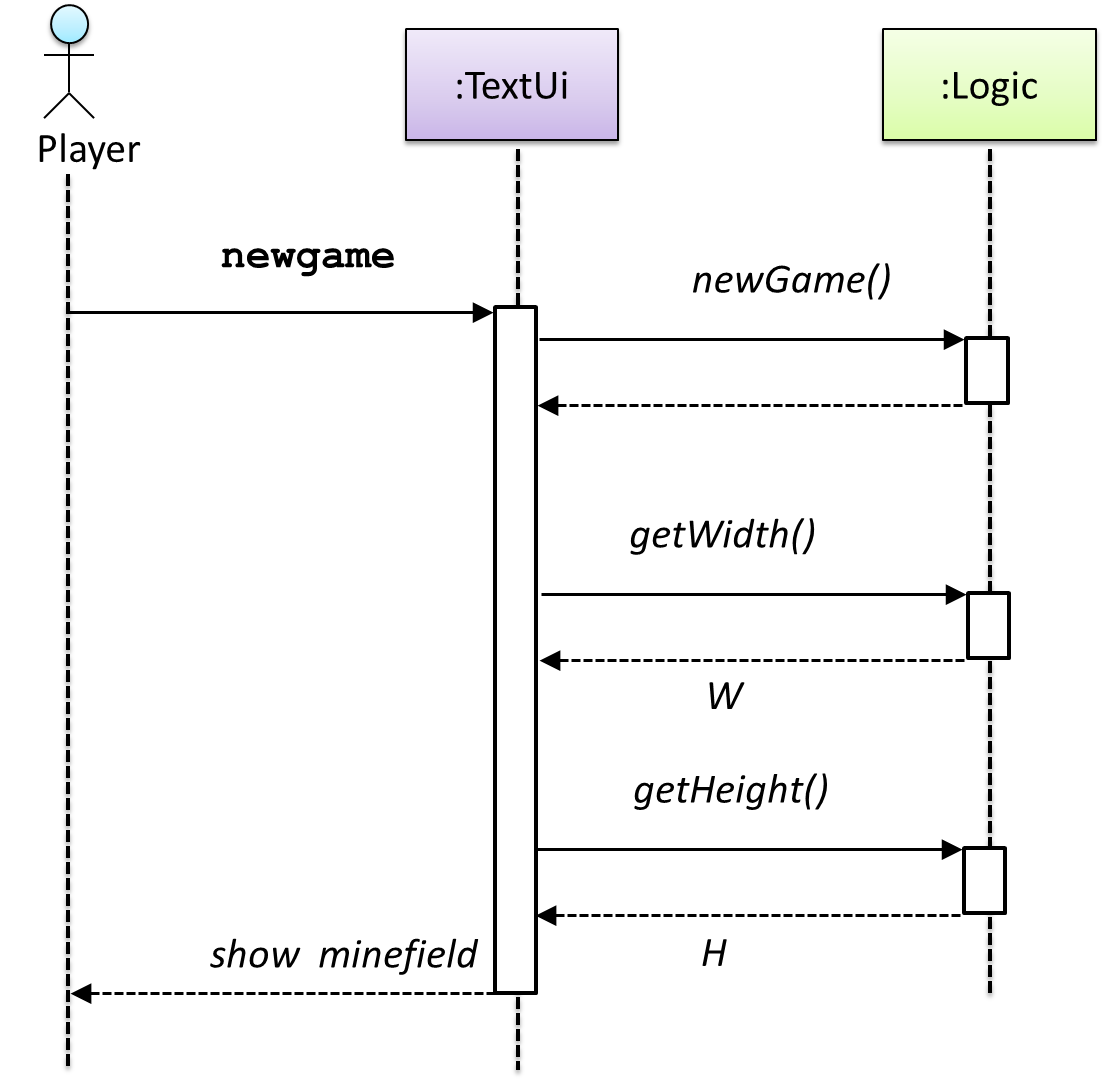 The above diagram assumes that W and H are the only information TextUi requires to display the minefield to the Player. Note that there could be other ways of doing this.

The Logic methods you conceptualized in our modeling so far are:

Now, let us look at what other objects and interactions are needed to support the newGame() operation. It is likely that a new Minefield object is created when the newGame() method is called.

Note that the behavior of the Minefield constructor has been abstracted away. It can be designed at a later stage.

Given below are the interactions between the player and the TextUi for the whole game. 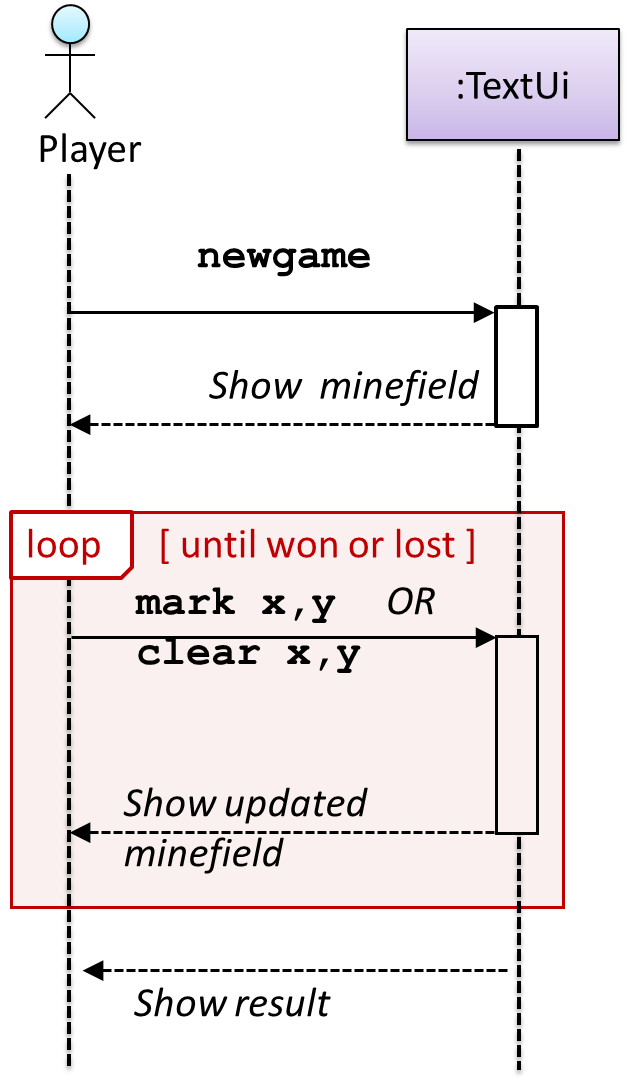 Note that using sequence diagramsa similar technique can be used when discovering/defining the architecture-level APIs.

Defining the architecture-level APIs for a small Tic-Tac-Toe game:

Continuing with the example in [ Design → Modeling → Modeling a Solution → Basic], next let us model how the TextUi interacts with the Logic to support the mark and clear operations until the game is won or lost. 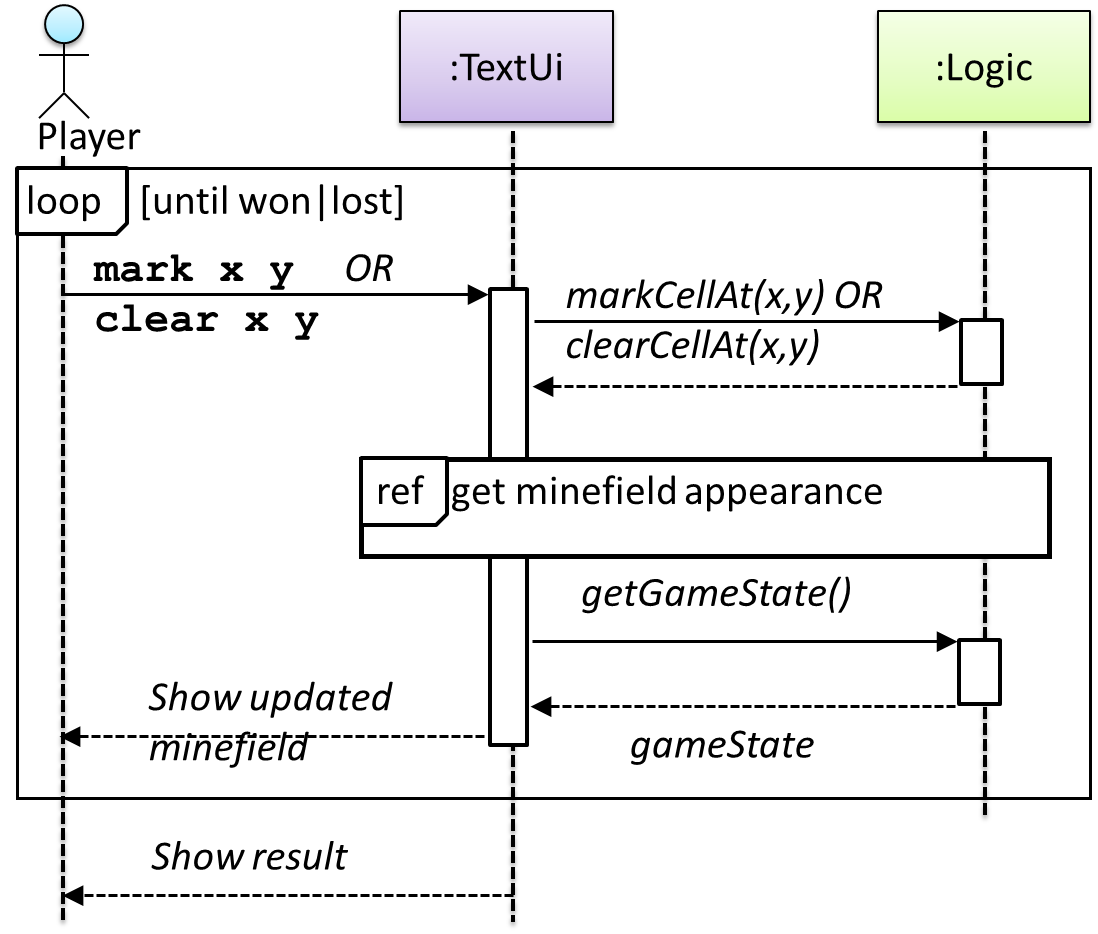 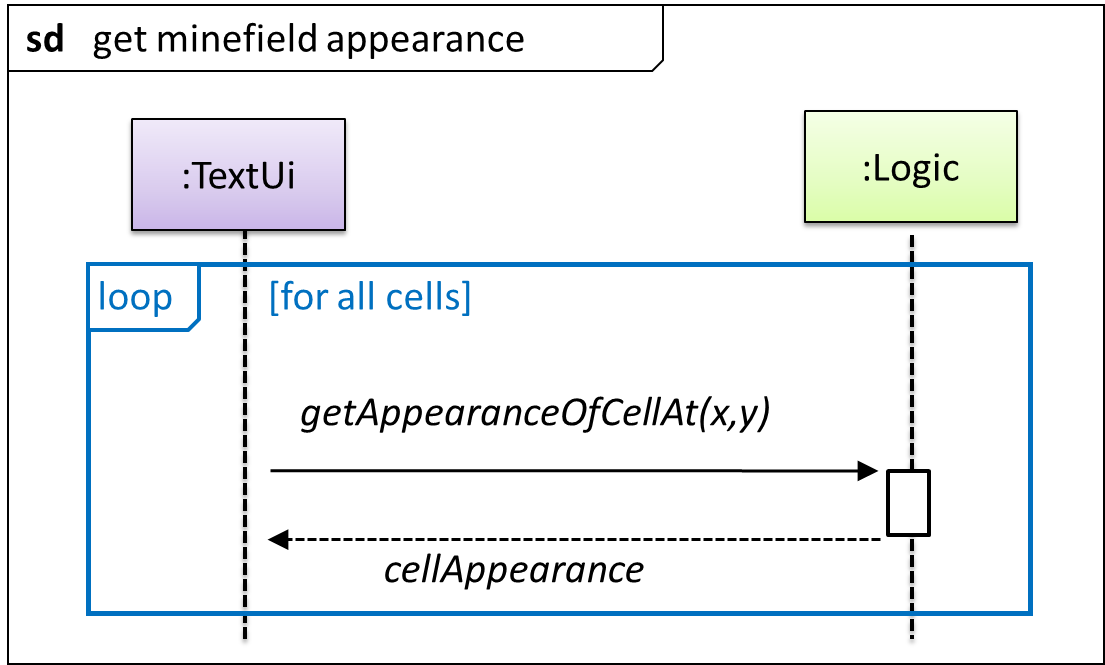 This interaction adds the following methods to the Logic class:

And it adds the following operation to Logic API:

In the above design, TextUi does not access Cell objects directly. Instead, it gets values of type CELL_APPEARANCE from Logic to be displayed as a minefield to the player. Alternatively, each cell or the entire minefield can be passed directly to TextUi.

Here is the updated class diagram:

The above is for the case when Actor Player interacts with the system using a text UI. Additional operations (if any) required for the GUI can be discovered similarly. Suppose Logic supports a reset() operation. You can model it like this:

Our current model assumes that the Minefield object has enough information (i.e. H, W, and mine locations) to create itself.

An alternative is to have a ConfigGenerator object that generates a string containing the minefield information as shown below.

In addition, getWidth(), getHeight(), markCellAt(x,y) and clearCellAt(x,y) can be handled like this. 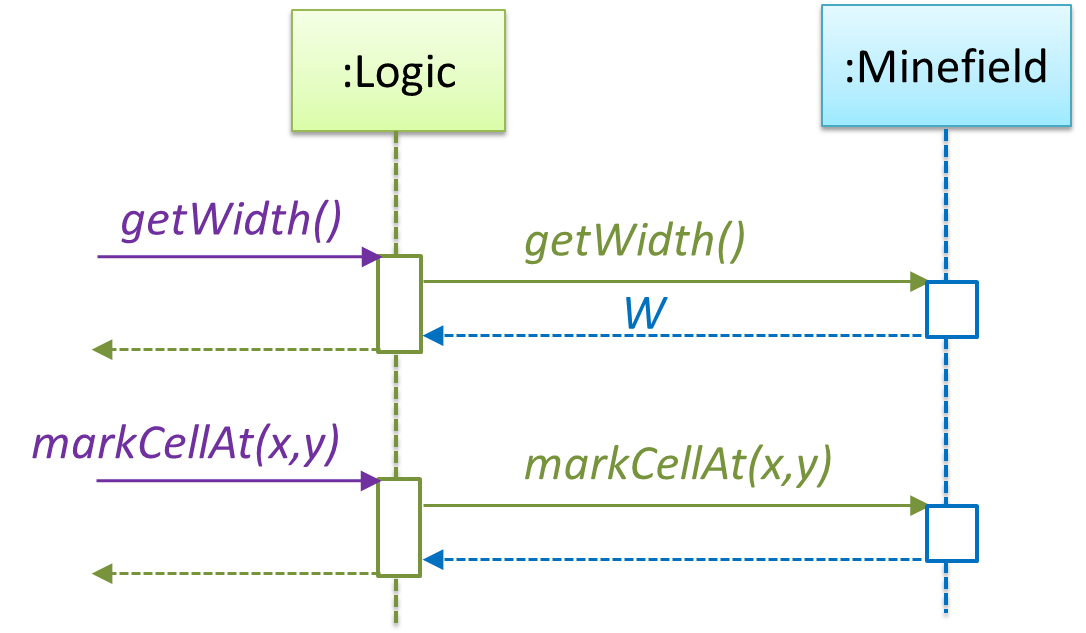 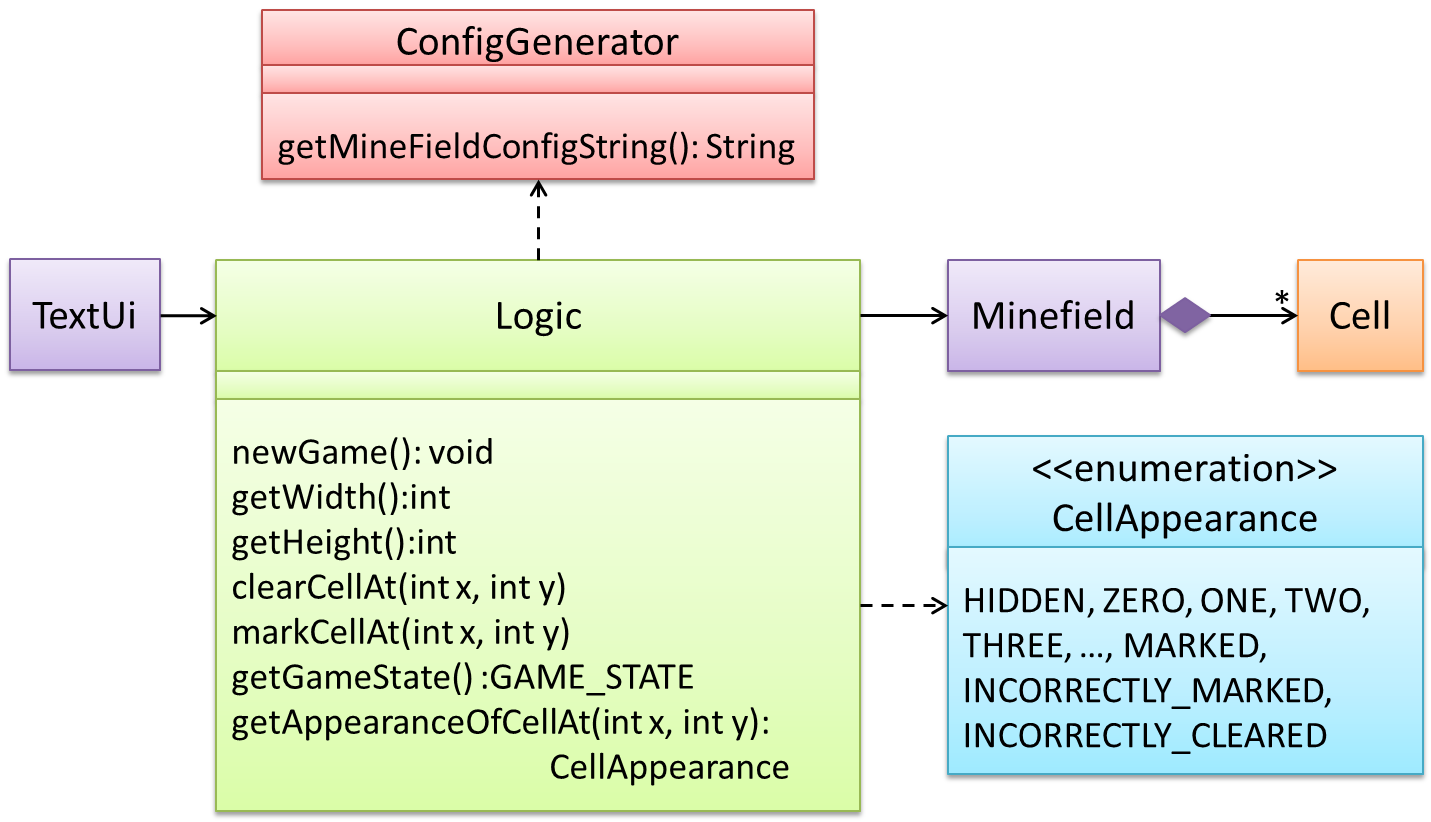 How is the getGameState() operation supported? Given below are two ways (there could be other ways):

Here’s the SD for option 1. 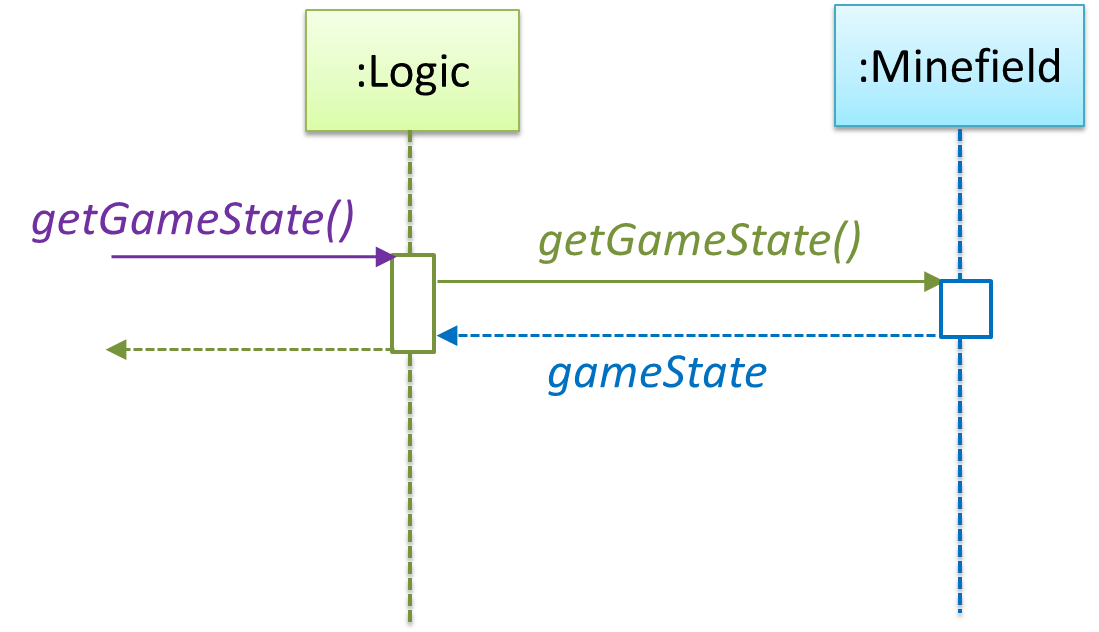 Here’s the SD for option 2. Assume that the game state is updated after every mark/clear action. 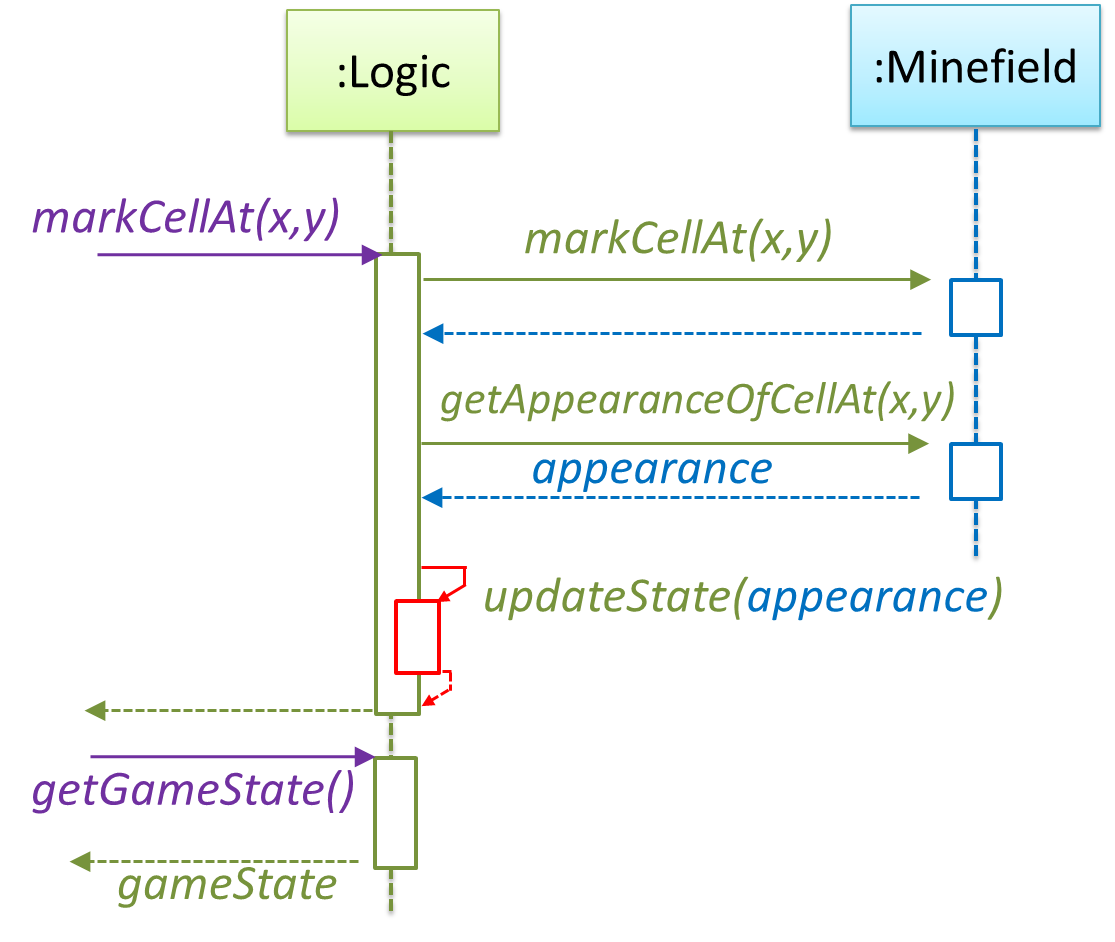 It is now time to explore what happens inside the Minefield constructor. One way is to design it as follows. 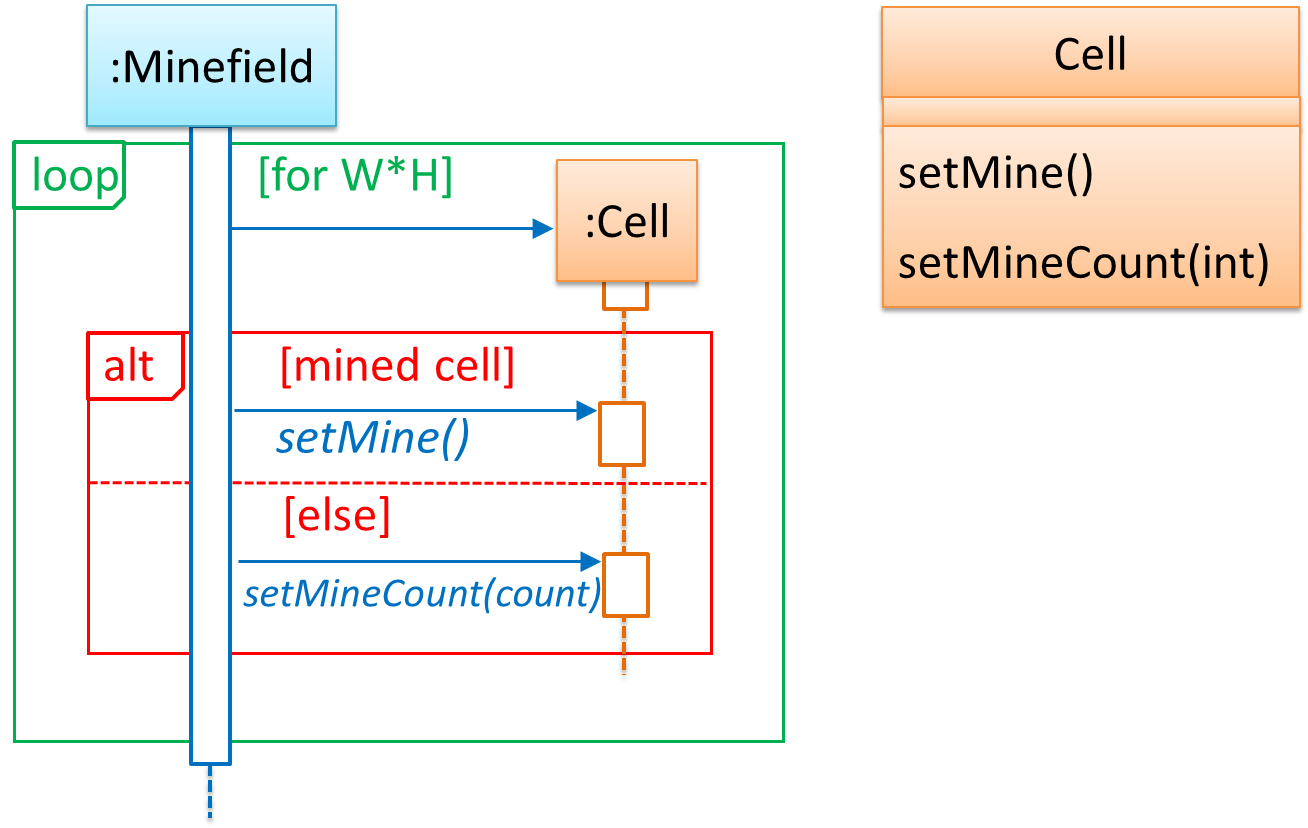 Now let us assume that Minesweeper supports a ‘timing’ feature. 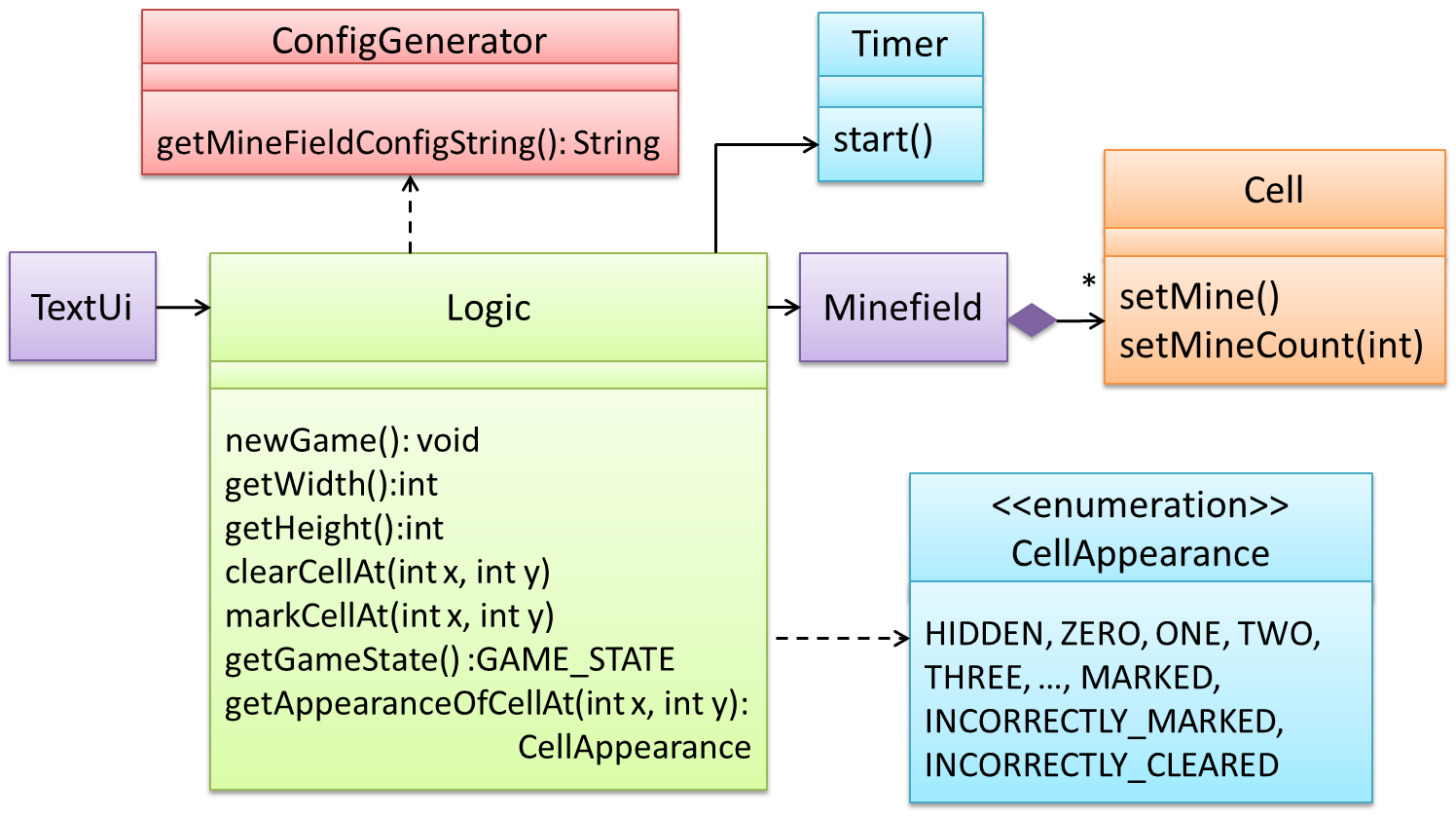 When designing components, it is not necessary to draw elaborate UML diagrams capturing all details of the design. They can be done as rough sketches. For example, draw sequence diagrams only when you are not sure which operations are required by each class, or when you want to verify that your class structure can indeed support the required operations.