Angular is a platform that makes it easy to build applications with the web. Angular combines declarative templates, dependency injection, end to end tooling, and integrated best practices to solve development challenges. Angular empowers developers to build applications that live on the web, mobile, or the desktop.

Let us understand some key terms in that definition starting with declarative templates.

Consider a simple web application that displays the name of a person as shown below.

The sandbox allows you to edit the code of the web application. You can enter your name in the text box and see how the UI is automatically updated. You can also view and edit the code by clicking on the "Both" button.

The UI of an Angular app is defined in templates which contain a mix of HTML code and HTML-like custom tags. The template for the above example (defined in person.component.html) is given below:

The templates used in Angular are declarative because they describe what the view should look like rather than give instructions on how to construct the view. In the above example, we declare what we want to display (i.e., name) and Angular renders the view. A noteworthy feature about the UI rendered by Angular is its dynamic behavior. You will notice that as you change the name in the text box, the name rendered on the app is also updated. This is because the UI and the application data are automatically synchronized by Angular as explained here.

Angular organizes the instructions (written in TypeScript) that describe how the view must rendered, into Components. Given below is the component file person.component.ts of the PersonComponent :

The @Component tag is used to mark a component. It provides the metadata that determines how the component is processed during runtime.

Now let us look at what Dependency Injection (DI) means. Dependencies are services that a class needs in order to perform its function. We can visualize this with the help of an example.

Figure 1. What is a dependency? (source: freecodecamp)

Dependency injection is a way of providing a class with the required services. Given below is an injectable service class.

The PersonComponent declared previously, can make use of this PersonService by injecting the dependency in its constructor as a parameter.

In the above example, we write the getPersons method only once in the service class and we can access this method from any component by injecting the service in the constructor. This way of using DI increases the efficiency and modularity (as per the Angular official website).

Declarative Templates and Dependency Injection are only a couple of noteworthy features of Angular. A more comprehensive list is available on the official website.

Now that we know what Angular is, let us look at some benefits it has to offer.

Angular provides developers with tools that enforce "best practices". Let us look at some of these tools.

This article provides a comprehensive list of best tooling services offered by Angular.

Using the modern versions of Angular, developers can build applications that live on the web, mobile, or the desktop.

Web apps have two main components, a View and a Model. The View component is responsible for displaying data (i.e., the part users see). The Model is concerned with the logic implementation of the application. It updates and retrieves the data to and from the database. Data binding refers to the exchange of data between the View and Model components. There are two types of data binding as shown below. 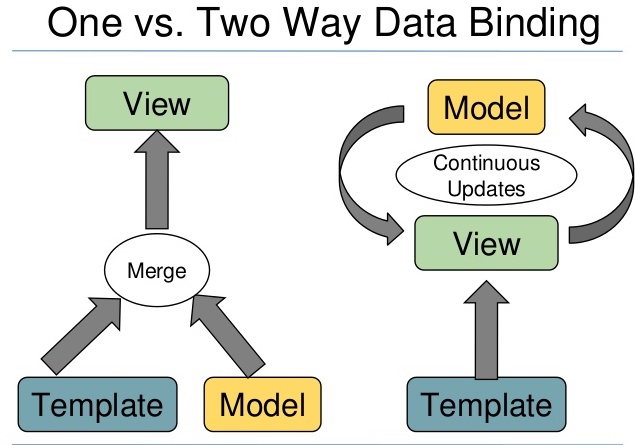 Some frameworks like React provide one-way data binding i.e., when there is a change to the Model, the View updates automatically. However, if the app allows users to change data through the view (e.g., entering your name in the textbox), the developer has to write code to propagate that change to the Model.

In contrast, Angular provides data binding in both ways. That means even changes to the View can be propagated to the Model automatically, without writing extra code for that.

This article on Medium provides a good introduction to two-way data binding in Angular.

Comparison With Other Popular Frontend Frameworks

React and Vue are two popular alternatives to Angular.

React is a popular Javascript library, open sourced by Facebook. The ease of learning React is a key advantage over Angular. It also provides more flexibility as it allows integration of third party libraries.

Vue, another open-source JavaScript framework, offers some advantages over Angular, like increased flexibility, simple structure and ease of integration. This makes it easier to learn Vue as compared to Angular or React.

Below are a few resources that give a brief comparison between these popular frontend frameworks.

Getting Started With Angular

Given below are a few steps that will help you ease into the Angular environment: