What Is Security Testing?

Testing is defined by the Open Web Application Security Project (OWASP is a worldwide non-profit organization focused on improving the security of software.OWASP) as a process of comparing the state of a system or application against a set of criteria [1]. Security testing then is a type of software testing where the criteria to be compared against comprise of security requirements.

Security testing is often categorised, somewhat arbitrarily, according to either the type of vulnerability being tested or the type of testing being done. A common categorisation as defined by OWASP ZAP is as follows [2:1]:

Note that risk assessment, which is commonly listed as part of security testing, is not included in this list. That is because a risk assessment is not actually a test but rather the analysis of the perceived severity of different risks (software security, personnel security, hardware security, etc.) and any mitigation steps for those risks.

Why Have Security Testing?

Security testing ensures that a system is secure. Since security requirements differ depending on the goals of the project, it is often hard to define the concept of what it means to be secure. One definition is as follows [3]:

This definition encompasses two major aspects; first is the protection of data and the second is access to that data. Whether the system is desktop or web-based, we will loosely define security as revolving around the two aforementioned aspects.

There is more to the concept of security than the working definition used here.

Security testing can be integrated into every stage of the Software Development Life Cycle (SDLC). A conceptual example of such an integration is as follows [7]:

Figure 1 - Example of Security Testing during a SDLC.

To understand this in more detail, we can deconstruct the application of security testing into its manifestation in different stages of software development.

The following series of steps adapted from the OWASP Testing Guide [1:1] provide general applications of security testing in a generic SDLC process. 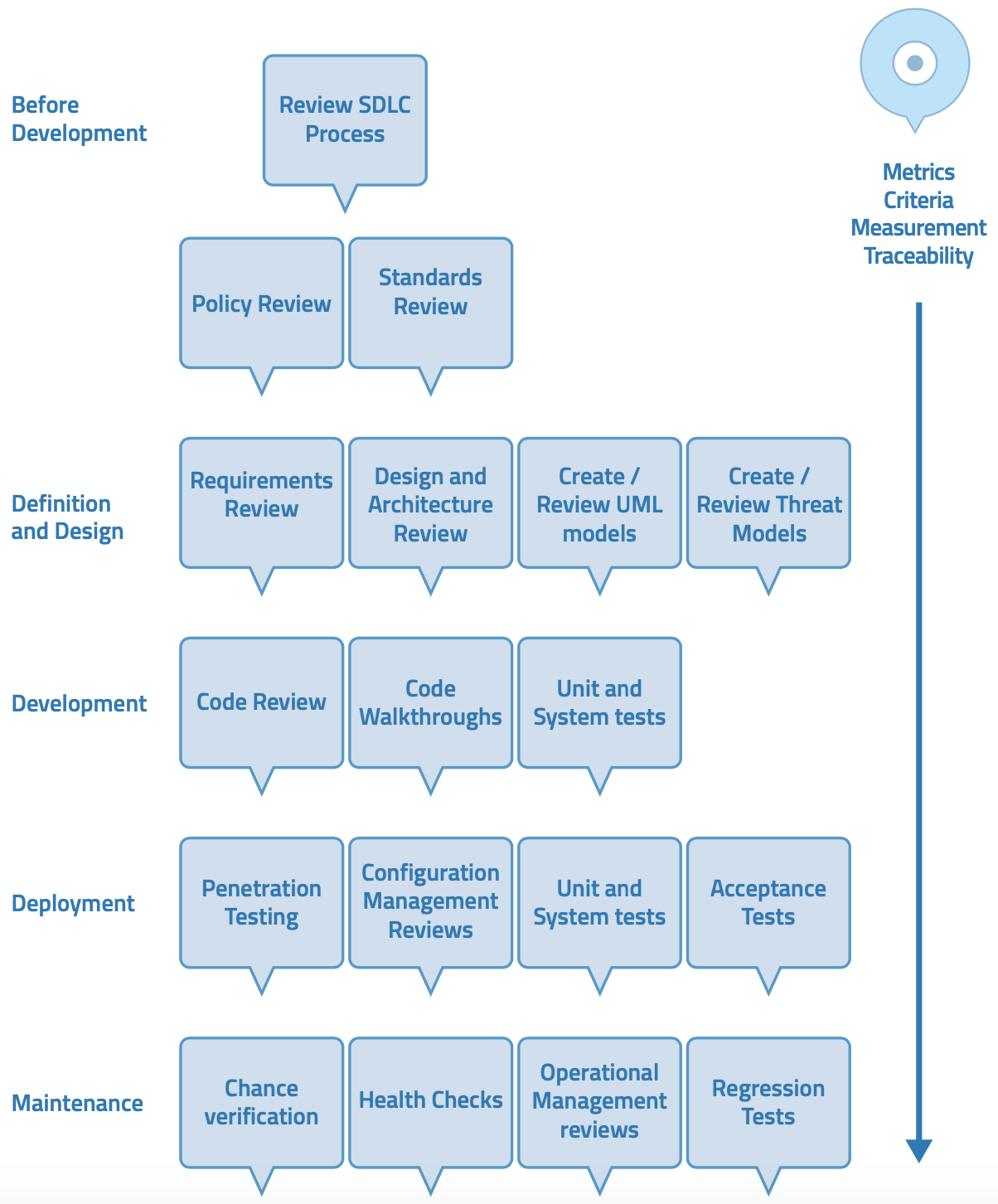 Before application development starts, an adequate SDLC must be defined where security is inherent at each stage.

Ensure that there are appropriate policies, standards, and documentation in place. Documentation is extremely important as it gives development teams guidelines and policies that they can follow. An example of one such documentation is the OWASP Secure Coding Practices Quick Reference Guide [8].

Step 2: During Definition and Design

For example, if there is a security requirement that states that users must be registered before they can get access to a particular section of a website, does this mean that the user must be registered with the system or should the user be authenticated? Ensure that requirements are as unambiguous as possible.

Identifying security flaws in the design phase is not only one of the most cost-efficient places to identify flaws, but can be one of the most effective places to make changes. For example, if it is identified that the design calls for authorization decisions to be made in multiple places, it may be appropriate to consider having a central component responsible for authorization. If the application is performing data validation at multiple places, it may be appropriate to develop a central validation framework (i.e. fixing input validation in one place, rather than in hundreds of places).

Unit tests and system tests should be written to explicitly ensure adherence to functional security requirements. For example, an application with an access control feature should include unit tests to ensure that unauthorised access credentials are not accepted.

The purpose is not to perform a code review, but to understand at a high level: the flow, the layout, and the structure of the code that makes up the application.

Armed with a good understanding of how the code is structured and why certain things were coded the way they were, the tester can now examine the actual code for security defects.

Having tested the requirements, analyzed the design, and performed code review, it might be assumed that all issues have been caught. Hopefully this is the case, but penetration testing (a.k.a. pentesting) the application after it has been deployed provides a last check to ensure that nothing has been missed.

Penetration testing is carried out as if the tester was a malicious external attacker.

Where to Go From Here?

Now that you know conceptually what security testing is about and how it's generally applied, you can afford to focus on topics depending on your role and interests:

Breakdown by SoftwareTestingHelp.com: A breakdown of security testing into common attack vectors and recommended tools.

Wikipedia Article on Security Testing: Coverage on the abstract concepts of security testing and the taxonomy involved.

2017 Cost of Data Breach Study: IBM sponsored report for a study on the cost of data breaches in 2017.

OWASP Top 10 Examples: Real examples of what might happen if Security Testing is overlooked.

Overview by Guru99.com: A brief summary of Security Testing and it's role in Software Testing.