React is a declarative, efficient, and flexible JavaScript library for building user interfaces. It lets you compose complex UIs from small and isolated pieces of code called 'components'.

Let us understand some key features of React with the help of an example. A web application that displays the name of a person is given below:

The sandbox above is editable. You can change the name using the textbox in the application and see how the UI automatically gets updated. You can view the application code by clicking the blue button next to "React: An Introductory Example".

The UI of a React application is defined using a mix of HTML code and HTML-like syntax, called JSX. The main view of the application above (defined in the App.render() method in index.js) is given as follows:

In the above example, we declare what we want to display (i.e. name) and React renders the appropriate view based on the updated application data. This is known as the Declarative programming focuses on what the program should accomplish without specifying how the program should achieve the result.declarative approach. With the declarative approach, you just need to specify what you want to show in the UI when the application data changes, rather than giving instructions on how to update the UI.

React encapsulates application views and relevant data and logic for updating the views using components. A combination of components that exchange information with one another is used to build the UI of a React application.

For example, the application above is divided into two components:

As you can see, React components are just JavaScript functions that accept arbitrary input and return a declarative view describing what should appear in the application's UI.

Now that we know what React is, let us look at some benefits it has to offer.

Web applications can have a lot of user interaction and data updates, which results in changes being made to the The Document Object Model, or the 'DOM', is an interface to web pages. It represents the page as nodes and objects, allowing programs to read and manipulate the page's content, structure, and styles.DOM. Adding and removing DOM nodes isn't slow, but the performance-bottleneck arises because the browser needs to A reflow occurs when the structure of the DOM tree changes, and a repaint occurs on style changes. These operations can get quite expensive for large DOM trees.reflow and repaint the UI every time the DOM is changed.

React minimizes this update time by using a virtual DOM. The virtual DOM is a JavaScript object that is kept in the memory of your application. 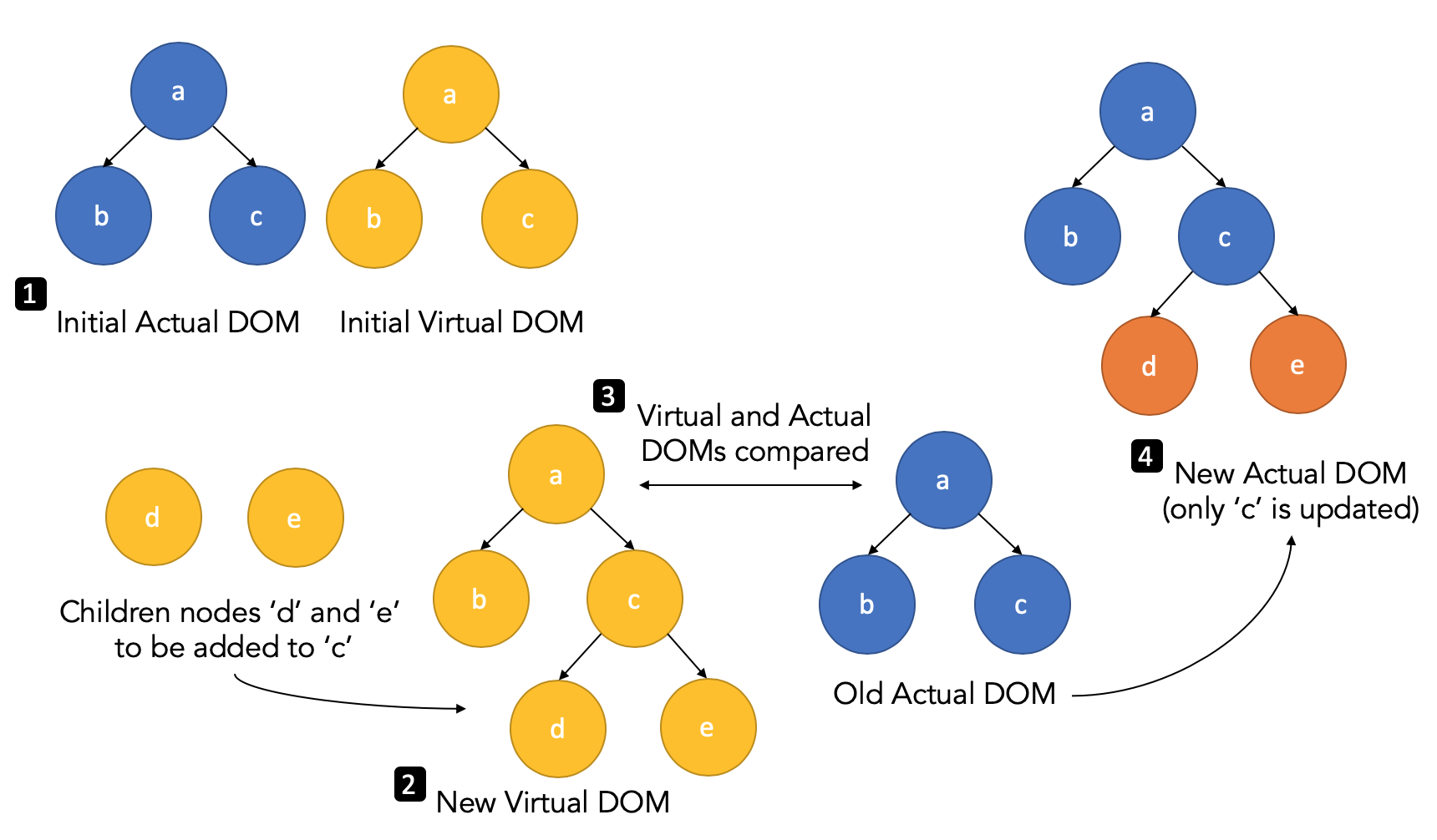 The traditional Imperative programming focuses on explicitly describing how a program operates.imperative approach of building a web application requires you to describe how you want your UI to change when your application data changes.

Most web applications usually have to interact with a lot of DOM elements and events. Also, different browsers have variations in their implementations of the The core DOM consists of the properties and methods of the DOM (nodeName, getElementById(), etc).core DOM, The events system consists of different kinds of events that the DOM supports (blur, change, etc).events system and even styles that can be applied to DOM elements! If you want your application to work across different browsers, you would need to manually take care of these variations with the imperative approach.

React's declarative approach simplifies this process because it abstracts the complexity of interacting with the actual DOM elements and events. For example, the virtual DOM helps React abstract browser-specific operations on DOM elements. Additionally, React provides its own events system so that events can work in the same way across different browsers.

A React application is made up of a combination of components. Components are independent from each other, and like functions, they map the same input to the same output. This makes it easy to write unit tests for your application.

Additionally, React only allows data to flow downwards (one-way data binding) using state and props, which makes your application easier to debug as you can be sure that the data updates the UI, and never the other way around.

Other Advantages of React

Besides the three main benefits explained above, React has the following advantages:

React and Other Competing Alternatives

There are a lot of JavaScript frameworks and libraries that you can use to build your next web application. Some popular alternatives to React are Angular and Vue.

How do you decide which one to use? Here are some resources to help you choose between them:

Every framework has its pros and cons, but hopefully you have managed to see that React removes some of the complexity that comes with building user interfaces.

Getting Started With React

The official React website is a great place to get started. It includes:

If you want to add React to an existing project, you can take a look at React's official guide for doing so. Alternatively, if you are creating a new React application, you can use one of the recommended toolchains to get the best user and developer experience.

The official website also has advanced guides if you want to understand how React works behind the scenes.

As React is a fairly popular library, you can find a lot of comprehensive resources online. Here are some resources that can be useful:

If you need help with React, you can get support from React's community of millions of developers that are active on Stack Overflow and discussion forums like Dev and Hashnode.

Lastly, if you want to know what to learn after getting familiar with React, here is a comprehensive roadmap that you can follow to become a full-fledged React developer.